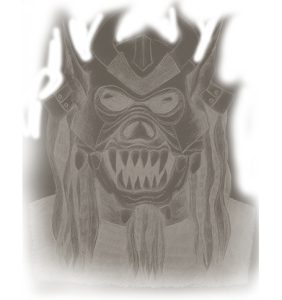 Abyss – Region within the mirror world where terrifying monsters and creatures are imprisoned within “deepest reflection.”

Barrion – Massive rock walls that surround and partition the various regions of the underlands. The largest of all barrions is the Great Telexian Divide, which is parallel and inland to the Atlantic seaboard.

Battleaxe – A large instrument of death used by some races in the underlands. A kandalarian battleaxe has a blunt metal stub on one end and a large, serrated blade on the other. Trolls are also know to use this instrument of death.

BobbiNo – Light-weight, egg-shaped crystal about the size of a softball. When two strobe lights are placed on opposite sides, the diamond-like gem creates a narrow beam (doorway) to the shadow world of Thyatira. Seven such crystals have been discovered by various subterranean races with each gem possessing unique powers, such as the Vivvia and the Ubiquiton.

Bordova – Large beasts that resemble a cross between a water buffalo and a Gila monster. Bordova are used by the trolls for warfare and as beasts of burden.

Boreworms – Pallid slug-like parasites that live in the upper rock crevices in the petrified glades of Semmi-Obeedo. Measuring about a half inches in diameter and four to five inches in length, the nematode has a bite that anesthetizes the skin, permitting  it to burrow into the victim.

Boroughs – Cities within the great gnomen valley. Numbering four in all, the largest borough is Pro-Coak Toanday.

Bunyip – A vicious beast from Aboriginal legends. It is believed that the bunyip lives in swamps, creeks, and billabongs of Australia. The bunyip also lives underground and is nocturnal, coming to the surface after dusk to feed. The bunyip’s bite (saliva) is lethal.

Cannoid – A dog-like creature that resembles a Great Dane and has remarkable tracking abilities. Cannoids live in the Starling Sphere and the Elfin Realm, and have telepathic abilities.

Diadem – A precious jeweled crown worn by a king or queen. The gnomen Royal Diadem signifies rulership and authority to govern.

Deadly Rocks – A passageway between Creetswarron Swamp and Ilda-dunn Crossing were the rock formations are unstable due to underground lava flows and magnetic fields – causing spatial and dimensional shifting.

Deceleron – A transitronic deceleron is a hand-held device created by the mêdebáhn for the purposes of exploring the uplands without detection by humans. The machine literally slows time and can be adjusted to affect a large or small area. Those left within the affected zone are unaware of the temporal distortions.

Dindólio – A diversion involving supernatural powers. Starlings possess the power to trick or “fool” their enemies by such magic.